About the Festival Back to 2016 Films

An obsession with numbers and patterns leads Emily Lynch Victory into the classroom – as well as towards her paintbrush. She strives to crack the code of complex math through her uniquely beautiful paintings. 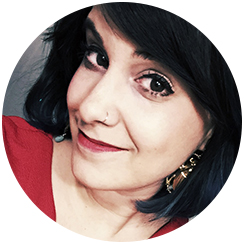 Maria Bartholdi is multimedia producer with a reputation for wearing many hats. From videography and editing to field production and writing — her strengths include a strong storytelling sense with an emphasis on crafting emotional, unique and visually stunning pieces. If she’s not working on a new project for TPT’s REWIRE initiative, you can find her onstage performing improv comedy – or perhaps hosting her weekly podcast about "Magic: The Gathering." Or maybe…just maybe…you’ll stumble across her teaching a Welsh language seminar. She’s the proud recipient of six Upper Midwest Emmy Awards®.

For many people, art and math don’t go hand in hand. Yet for Emily Lynch Victory, these two subjects combined create something beautiful. Through “Artist Day Jobs” the audience learns more about Victory’s methods both in the classroom and the studio, and have the chance to witness her love for patterns and numbers. Director Maria Bartholdi tells PBS more.

PBS: The concept of being more of a right brain thinker over a left brain thinker and vice versa has been debunked over the years, but even so it’s not every day that you find someone who has a passion for both math and art. How did you learn about Emily and what influenced you to share her story?

MARIA BARTHOLDI: Twin Cities PBS put out a call for artists with interesting day jobs when we began production work on the series. We have a fantastic community of artists in the Minneapolis/St. Paul area and knew they would have some amazing ideas for us. And we were right! Someone nominated Emily for the program and, after looking at some of her work, we knew we wanted to share her unique story and outlook on the artistic process.

PBS: It’s really interesting to see how Emily thinks things through and how she connects math to art. What was it like to witness her go through that process?

MARIA: It was particularly interesting for me, not being a math person. I’ve always thought of art and math requiring two very different mental processes – but Emily managed to change my mind. It was really inspiring to watch her work through complex math problems with her art. After seeing a few of her works based on difficult mathematical theorems, those theorems became (at least for me) comprehensible when they previously hadn’t been. As Emily says, “You can learn a different way."

PBS: During the film there are many shots of her paintings and drawings, but there’s a focus on one image specifically, which is inspired by the base 3 number system. Was there a reason for highlighting this piece of artwork specifically?

MARIA: I wanted to highlight this piece because not only did Emily manage to paint the number system Base 3 beautifully, she also composed music based around it, which totally blows my mind. The tune she put together for it is strange and haunting… and, to me, that’s also how I see math a lot of the time: a strange and alien framework that the entire universe works within.

PBS: When the audience is first introduced to Emily’s artwork, it appears that she’s just beginning a piece involving probability that is then completed by the end of the film. Her process, however, seems quite complex. How long did it take her to finish this piece, or most of her works in general?

MARIA: I believe this piece took her a month or more to complete. Her work isn’t usually done on a schedule, just when she can find time – so the completion rate does vary. For her, the artwork is a release and something she can get totally lost in. Sometimes the pieces come together very quickly; other times they take more time and contemplation.

The mission of Twin Cities PBS is to “enrich lives and strengthen our community through the power of media.” As one of the nation’s leading public media organizations, Twin Cities PBS uses television, interactive media and community engagement to advance education, culture and citizenship. Over its 50 plus year history, Twin Cities PBS has been recognized for its innovation and creativity with numerous awards, including Peabody awards and national and regional Emmys. Based in St. Paul, MN, Twin Cities PBS is one of the highest rated PBS affiliates in the nation, reaching over 1.3 million people each month through multiple broadcast and online channels. The organization's particular areas of focus include: the educational readiness of children; serving the needs and unleashing the potential of America's aging population; engaging a new generation in the power of public media; and being the preferred media partner for organizations that align with our mission to enrich lives and strengthen community.